I woke this morning to the sound of my dogs running back and forth through the house.  They weren’t barking – just running.

The sound also woke Felix who is quicker in the mornings than I am.

Gulp.  Sure was.  And that was my Mom at the door waiting to take Meghan and I to the Race for the Cure in Central Park.

As I quickly washed, my face, and changed my clothes.  I let Felix see to Meghan.  I was annoyed at myself for oversleeping.  I purposely set the alarm on my cell phone so I would have to undo the lock screen to shut it down.  Apparently I was THAT tired.

We have been going to this race for at least 15 years.  Some of the participants have come and gone, but Mom and I have been there together… well except for 2003 when Meghan was just about a month old. 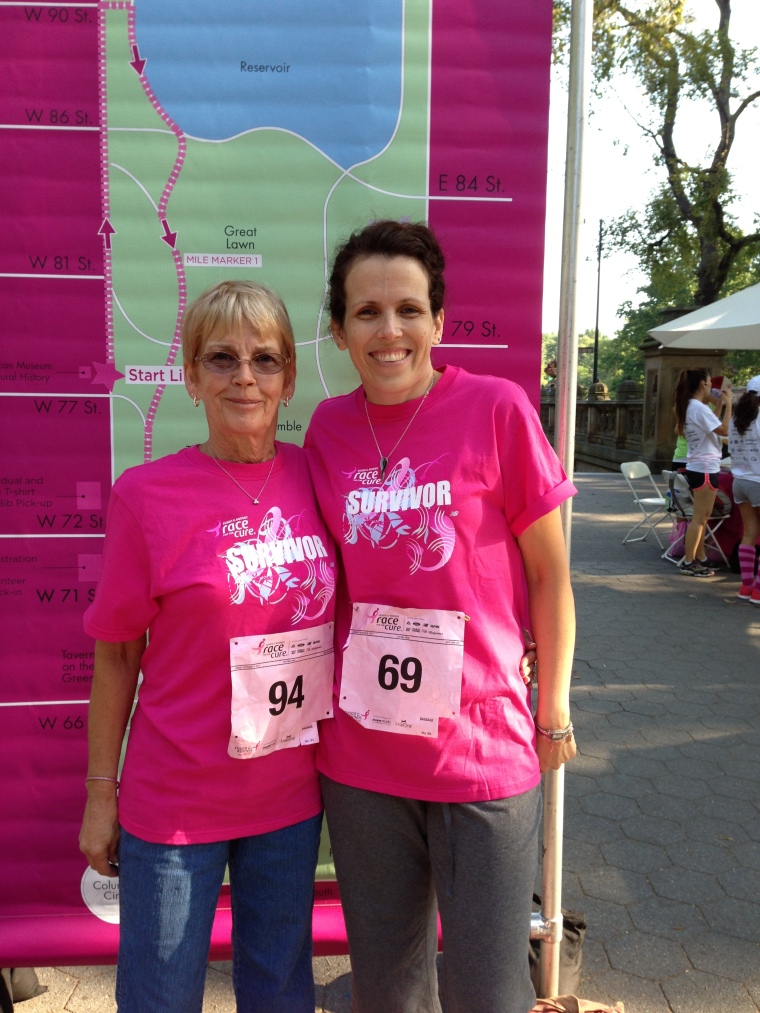 And, for the better part of the last 10 years Meghan has joined us.  She was always so eager to support Grandma, that once I had the title of “Survivor” too she was determined to support us both.

Except last year.  When she was sidelined.  Sick with a fever early in the school year.  As devastated as she was I convinced her this was the year that mattered.  This was the year I could say I was a FULL year without my breast cancer.

When Mom was first diagnosed in 1997, I wasn’t sure she would be ok.  Although she battled through 2 mastectomies, and chemo, and 5 years of tamoxifen like a champ, it became important to celebrate the victories.  The milestones.  So Meghan has grown up watching me acknowledge Grandma’s “Pink Ribbon Anniversaries” three times a year. (First surgery, second surgery, end of chemo)  And while the acknowledgements are small they are an understanding between us that we remember.  We are grateful.

The race every September in Central Park was a natural outgrowth of that.  A desire to celebrate.  To be thankful.  To remember. 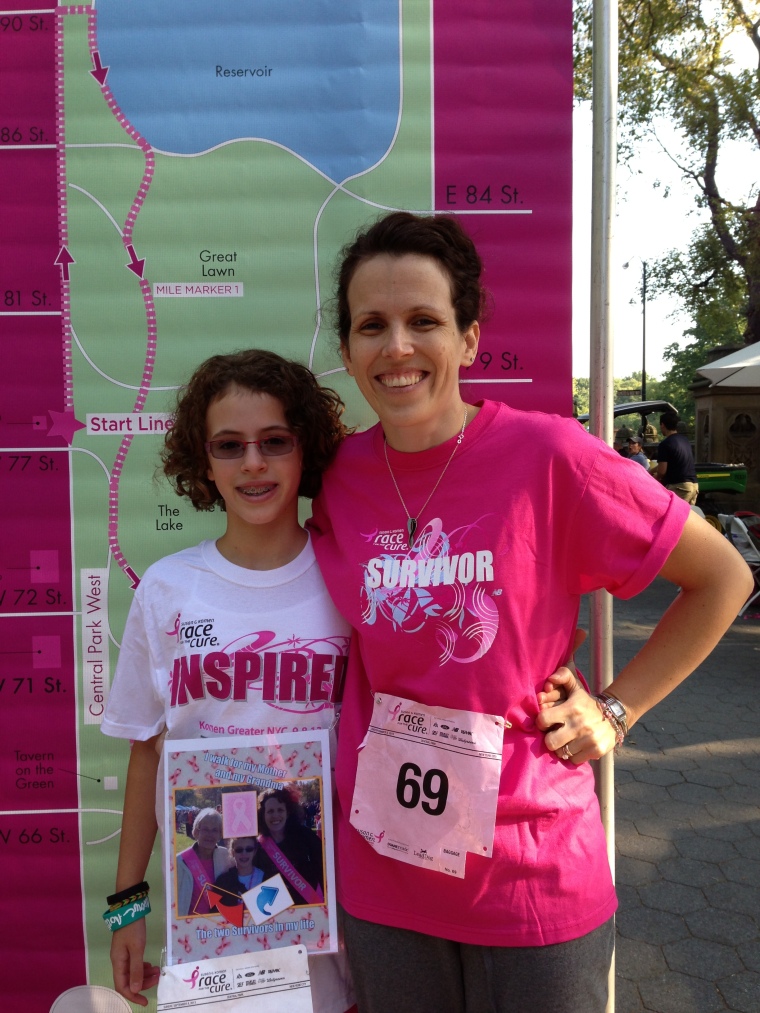 Of course for me things feel a bit different sometimes.  Last night I told my husband I sometimes feel guilty wearing the pink “Survivor” T shirt.  He was perplexed.  I explained that I didn’t feel like I “survived” chemo, or radiation, or any of the things most women go through.  To which his sassy reply was, “You were tired of the old boobs? That’s why you had them cut off?”

See I wonder sometimes if would have been different if there was no cancer.  If the mastectomy had indeed been prophylactic would that change the fact that a genetic predisposition – AKA Cowden’s Syndrome (in ADDITION to having a first degree relative with breast cancer,) had pretty much predetermined the fate of my breasts?

I have “met” in this virtual world, and now in my real life, quite a few “previvors” who have taken an empowered approach to their genetic predisposition and had a mastectomy, and/or a hysterectomy.

I would say they are as much “survivors” as anyone.  Bravery, coupled with a desire to be there for your children and your family motivates these women to endure major surgery(ies.)

http://www.thefreedictionary.com/survivor  The Free Dictionary.com has the following definition of Survivor…

v. sur·vived, sur·viv·ing, sur·vives
v.intr.
1. To remain alive or in existence.
2. To carry on despite hardships or trauma; persevere: families that were surviving in tents after the flood.
3. To remain functional or usable: I dropped the radio, but it survived.
v.tr.
1. To live longer than; outlive: She survived her husband by five years.
2. To live, persist, or remain usable through: plants that can survive frosts; a clock that survived a fall.
3. To cope with (a trauma or setback); persevere after: survived child abuse.
So I put on my pink shirt, and we got out the door (t+Chai in hand) in just a few minutes.  We blew into Manhattan and found a spot on the street close to the park.
We walked through the “Expo” which was a little thinner than most years, took a few pictures, and then it was time to walk.
Although the weather was beautiful, Mom’s pinched nerve is not cooperating the way she would like, so she took a shorter route as Meghan and I headed to the starting line. 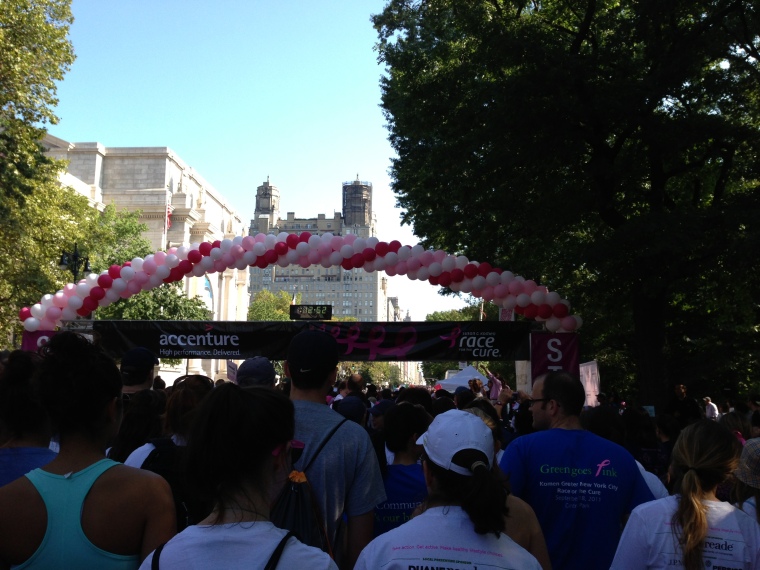 For 3,2 miles, I pushed Meghan in her push chair.  She made friends along the way.  She met a police dog, and lots of nice ladies to whom she gave her “Cowden’s Card.”  And every time she gave it out I thought – Cowden’s Syndrome is more rare than BRCA, but just as lethal, even more so in some ways.  People should know.  I reminded her how glad I was – to have her
there. 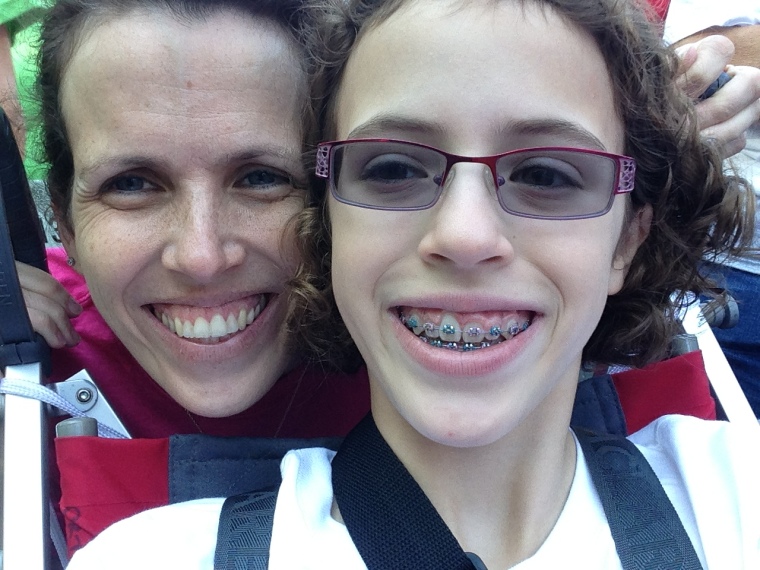 Just before the 3 mile mark we were joined by Grandma, and the three of us crossed the finish line together.
And as we walked under the pink balloon arch and turned towards the car I forced from my head the reality that we were now 2/3 pink.  I looked at my little girl in her white shirt, about to start 5th grade tomorrow.  I prayed for lots and lots of years for her to not have to worry about any of this.  I thought about how much better she looks in white than pink.  I searched my heart praying for a cure.

And in the depths of my soul I don’t go a day without considering her 85% lifetime breast cancer risk.
Dates are important.
Now March 5, 2012 gets added to our celebration list.
Life is uncertain.  Celebrate the little victories together.  They are what matters most.

One thought on “Race for the Cure!”