I have been busy this week – working a on a few new projects.  Trying to find some distracting hobbies.  I need a few things to every once in the while take the focus off the imminent cancer risks plaguing Meghan and I every second of every day.

So, I started talking a lot about Isagenix, the product that did so much to give my husband back his health, and to help him lose over 30 pounds in the process.

This week I have signed up four friends to try to get healthy with Isagenix, and I feel good about advocating a high quality product. 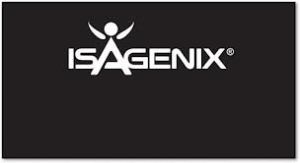 This week involved hosting an anniversary party for two overly deserving parents.  It also involved some run of the mill nonsense – dealing with ridiculous medical bills and the like, from people who will never “get” what it means to have to spend every day of your life out in front of a chronic, potentially life threatening rare disease, PTEN Hamartoma Tumor Syndrome – or Cowden’s Syndrome, as we usually refer to it.

I do my best every day, to raise awareness of what it is like to live with a rare disease, a genetic mutation that predisposes my daughter and I to so many cancers.  I do my best, wearing proudly our denim ribbon, and sharing ribbons with friends and family, to educate the community on our, and other Rare Diseases.

Now, I know its slow going, but I am confident that more people in our community have heard about Cowden’s Syndrome than just a year ago.  Of that I am sure.  And we will continue our grassroots effort – one person at a time.  Until hopefully, one day everyone will know of the “Global Genes Project,” and the 7.000+ Rare Diseases besides ours that are out there.

Today I sat down at a scoring site for the State Math Exam, and two girls I never met before feverishly gushed over the bravery of Angelina Jolie.  Having heard nothing of the story, I asked what all the fuss was about.

“She had a preventative double mastectomy because she has a gene that makes it more than 80% likely she will get breast cancer.  She is so brave!”

I smiled because I thought it was great that Angelina was well and had gone public.

“You know she decreased her breast cancer risk to under 5% now?  She is so brave!  I can’t imagine anyone doing that!”

I still kept quiet.  I quickly checked my Emails to reveal that the blogs I follow regularly were all over the Aneglina story and had eloquently covered it.  I listened some more.

Finally, almost on cue, they got bored with their story and asked me about my necklace – the denim ribbon. 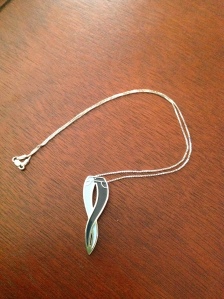 I told them I my daughter and I had a rare genetic disease.  That the denim ribbon was the symbol for rare and genetic disorders.  They asked what the name of it was.  So as I identified “Cowden’s Syndrome,” the expected reply was given.  “I haven’t heard of that.”

“Well,” in my most succinct conversational tone, “PTEN is a gene that stops tumor growth.  Ours is broken so we are more likely to get cancerous and non cancerous tumors all over our bodies.  Especially in the breast, thyroid, and uterus.”

“YOU MEAN YOU HAVE THE SAME GENE BROKEN AS ANGELINA JOLIE???”

(Having not fully read any article I quick double checked my suspicions and confirmed,) “No, she has a mutation on the BRCA1 gene. My daughter and I have the same 85% risk of breast cancer, as well as countless other elevated cancer risks.”

“Well if you ever have to get a mastectomy at least you’ll know Angelina did it.”

You know I never much followed the stars.  And I am so grateful for Angelina Jolie for being brave and going public.  But there is so much more people need to learn.  Nothing comes in neat little packages.  Nothing.

I stretched out my shirt so they could read. “Yes – they’re fake , the real ones tried to kill me!”

“I had my double mastectomy.  Last year.  They found cancer.  And I am ok.  Genetic mutations aren’t just for movie stars.  Bravery isn’t just for those who have wealth and power.  There are more of us than you think.”

I was grateful when the tests arrived at the table.  It changed the conversation.  People don’t want to talk about cancer.  Especially not young women with genetically caused cancer.  It makes them uncomfortable.

I am glad Angelina Jolie went public.  I just wish the public would open their eyes to the realities that are undoubtedly right next to them every single day.  It doesn’t take a star.  Just a conversation.