At any given point during our 10 days in Disney, our party of three also had six wheels and a boot.

We must have looked unusual to anyone who passed us by.

I traveled with a virtual pharmacy in my purse, which is really simply a string bag on my back, because who really wants to be fancy anyway?

The week before we left we had a PILE of appointments.  I think I lost count at 17 in the 5 days.  One of them was the orthopedist Meghan sees a few times a year.  He was catching up on the new diagnosis of Ehler’s-Danlos Syndrome, paying careful attention to her knee, which by all accounts has been her ‘Achilles heel’ her whole life.   There had been pain in that knee for weeks prior, which is always a concern.  One of the surgeries she has had repeatedly has been to correct the tracking of the patella.  Anxiety is warranted.

This doctor suggested an MRI to confirm the knee was tracking correctly.  He also said that she was ‘not to walk consecutive distances longer than one block’ at least until the pain in the knee settled.  He prescribed a painkiller and a muscle relaxant.  He told me she was not to walk the parks in Disney. She needed to spend most of the day confined to a wheelchair.  And while there is gratitude for the temporary nature of this situation, there is a mental and emotional adjustment to enduring it.

This was not a totally new arrangement for us, as the knee has limited her walking in the past.  However, there is always the hope that with age things will change.  And while Meghan is healthier and stronger than I have ever seen her, the realities of Ehler’s-Danlos and its wear and tear on the connective tissue are real and very present.  So, out came the wheelchair.

And, one of my appointments was an MRI follow up for the foot that has been a disaster since I fell at work January 8th.

The initial fall partially tore the lisfranc ligament.  Which might have been easier to recover from, except ligaments don’t show on xray.  So the initial diagnosis was a sprain.  Which was treated with 5 days rest.  Then 2 weeks later when the pain was more than it should have been and my primary asked for an MRI, GHI decided I didn’t need one yet and I could wait 6 more weeks.  So, I forced the foot into a shoe for a total of 8 weeks post injury before I couldn’t stand it anymore.  At that point an MRI finally picked up the partial tear.

I was booted for about 6 weeks.  I was pulled out of work and off my foot, but largely too little too late.  I returned and handled the foot conservatively, waiting to feel better.  Or at least closer to being able to walk like I did on January 7th.

Every other week there have been check ups at the podiatrist.  Two visits to a specialist in NYC. Days blended into weeks and my patience started to wear thin.  I began Physical Therapy, but even the PT was baffled by the amount of pain in the foot and encouraged me to keep looking for answers.

A repeat MRI was scheduled for 8/2.  I obtained the results on 8/14.  While the pain in the foot should have been an indicator, I was not prepared to hear that I needed to return to the walking boot, as I had a likely stress fracture in the cuboid bone, and a neuroma in between my second and third toes.   This mess courtesy of my body compensating to protect the lisfranc ligament while it healed.  I had unconsciously shifted all my weight to the outer part of my foot.  I was to limit my walking.  By that night I was back in my walking boot ordering a knee scooter for the trip to Disney.

I remember after the fall in January, and even after the diagnosis in March, feeling so happy that I would at least be healed and back to walking before our trip.  The best laid plans…

So when we headed out for a 5AM flight on 8/18, we had all our suitcases, a wheelchair and a knee scooter.  We checked three bags, and Felix pushed Meghan while I scooted behind.  We were a sight. 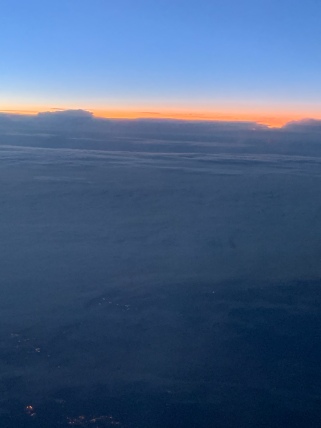 And after waking up at 2:30 for our flight and traveling via scooter through the Magic Kingdom, I wanted nothing more than to go home.  Immediately.  I felt like I had done a bad step aerobics video over and over on only my left thigh and butt cheek.  You might not realize the strain on the thigh when you rest the knee with a way-too-heavy boot hanging off the back.  There was just no way I was going to make it.

So Monday morning I released Meghan and Felix to the Magic Kingdom.  I sat in the hotel room.  I cried for about 10 minutes.  I called my mom. I made a cup of tea.  And then I made a plan.

I researched a new set of eyes to consult on the foot when I arrived home.  I rearranged our return flight to a more civil time to I could book an appointment for the 29th with confidence.  I stretched.  I took way too much Advil.

And sometime that morning between the NSAIDs and the caffeine, I started to feel the magic.  I sat on the hotel balcony.  I strengthened my resolve. 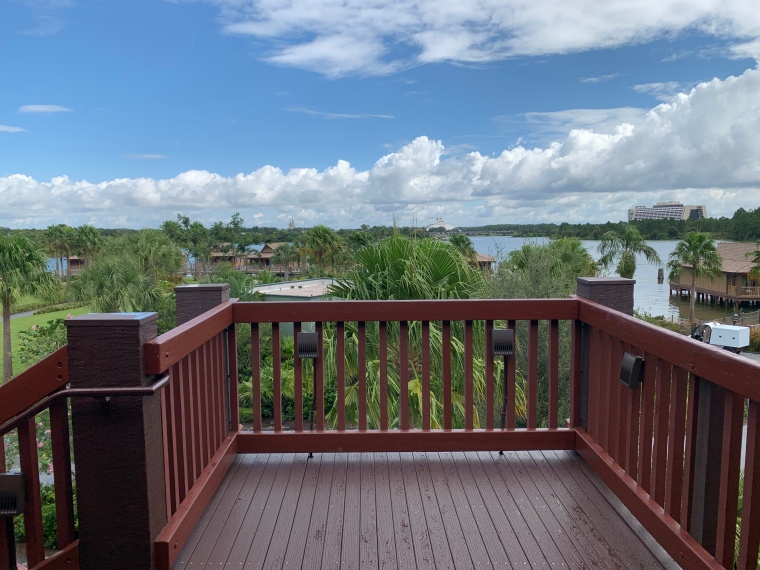 I am not sure at all why it seems everything is so hard.  I couldn’t fathom why I had sent my otherwise healthy kid off in a wheelchair, while I sweated inside a walking boot,  all the while healing from the Fine Needle Aspiration thyroid biopsy two days prior for thyroid nodules recurring on my previously quiet and well-behaved remaining thyroid lobe. (Partial thyroidectomy 1993 – dx multinodular goiter, 18 years before I had ever HEARD of Cowden’s Syndrome)

All the positive thinking in the world was not going to make anyone’s pain go away.  Not even a stomach burning amount of Advil and a few strong cocktails could do that.  But, I am a huge believer in a positive mindset.  And in that Monday morning overlooking the Hawaii themed resort, things started to fall into place in my mind and my heart.

I joined them later that day, and never left them again.  We traveled together – a family of three, six wheels and a boot.  We laughed a lot, we argued a little, and generally found the best in each other.  We met up with my sister and her family for a super fun night together.

We got to Mickey’s ‘Not So Scary’ Halloween Party for the first time.  We saw more characters than we’ve seen since she was quite young. 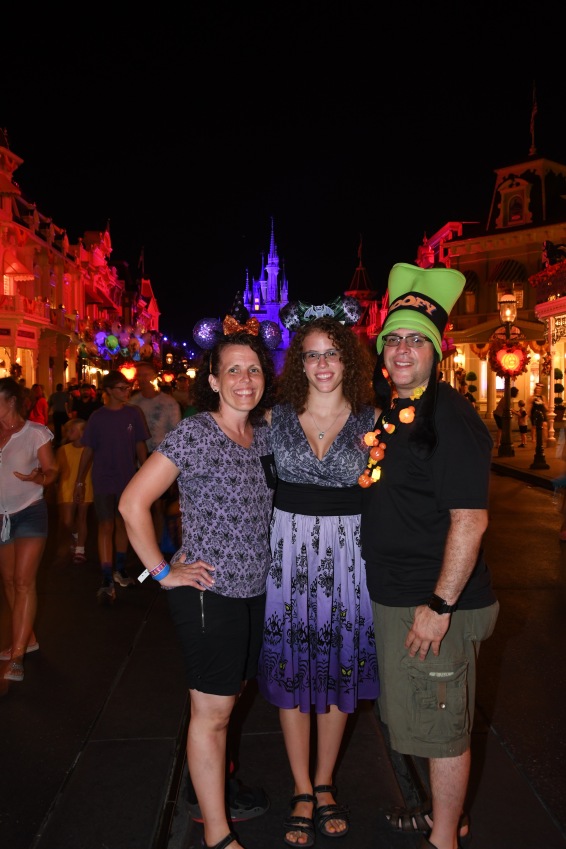 Finally, after many years of staring at the giant “Hot Air Balloon” in Disney Springs, I got myself on.  Because, Why not?  Magical.

We found that our resort had a stand serving dairy free Dole Whip – the first time my 16 year old ever had soft serve.  Magical. 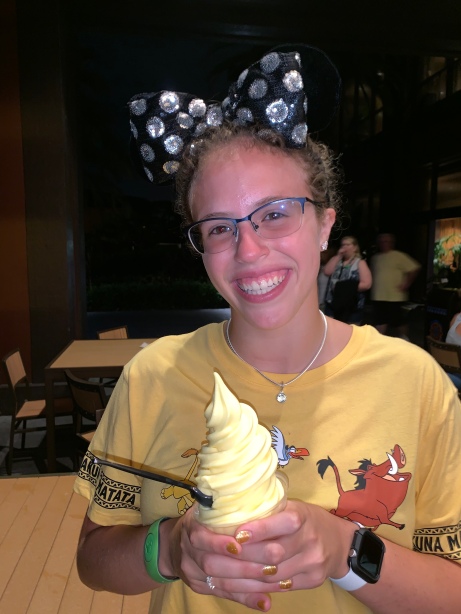 Some people wonder how we do the same vacation year after year.  They wonder how we don’t tire of it all.  For us, there is a magic that can’t be explained, only felt.  There is wonder in eating safely in restaurants and having access to a bakery free of gluten, dairy and soy.  There is joy in eliminating something so basic as food isolation, and sharing meals, sometimes as a family of three, and other times with some Disney friends.

There is magic running into Pluto in the lobby of your resort, or finding the Seven Dwarfs waiting to meet your family. 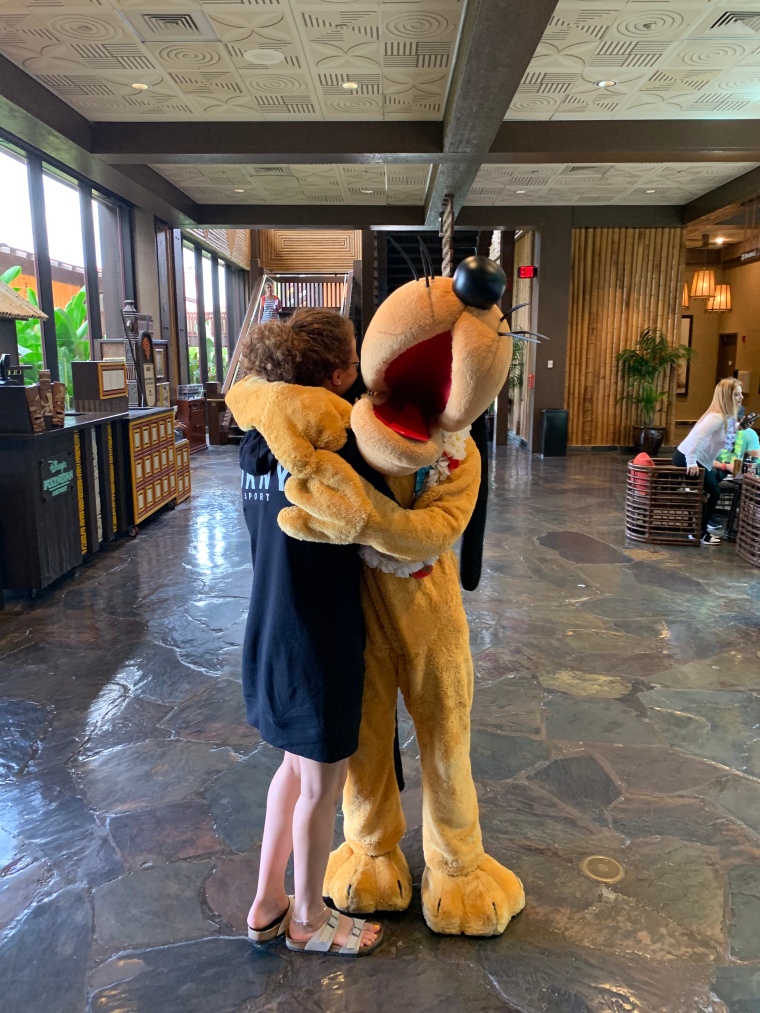 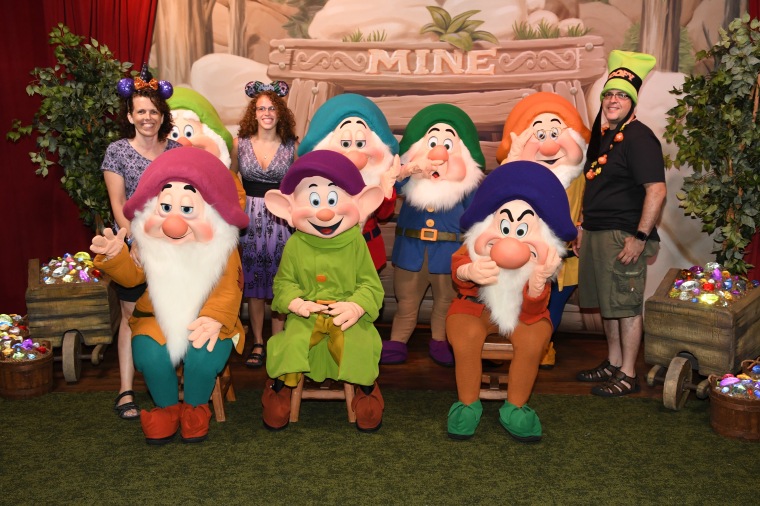 There is magic in roller coaster selfies, and Figment reminding us to use our imagination.

There is magic in all things familiar, and always finding something new. 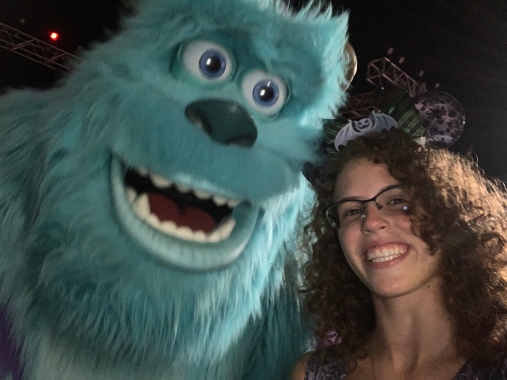 There is magic when you seek it, even with six wheels and a boot.

Because there will always be battles to fight.  So sometimes they can just wait 2 weeks.

The foot problem is not solved.  It’s time to find some serious answers.  I won’t open the school year for the first time in 22 years.  These next few weeks will be about making plans to heal.

There is no magical solution for my foot.  There will be more MRIs, and more doctors.

My patience will be tested in new ways.  I am not sure what to expect, and that makes me nervous.

But there will never be a single second that I regret adding 4 wheels and a boot to my own self to enjoy and appreciate the magic with my family.

I know the body can not heal if you don’t nourish the soul.

4 thoughts on “Six Wheels and a Boot”