It was three MRIs in two days that week in November.  That’s too many, in case you were wondering.

One was an extension of an August MRI, which had been a knee follow up.  If you’ve been following – you know that long story.  If you’re new, the AVM (Arteriovenous Malformation) she was likely born with in her right knee, has cost her 8 trips to the OR so far.  It requires frequent attention.

By frequent I mean we see the orthopedist more often than we see most family.  And this time the whole muscle band up her thigh had been acting odd.  So we reached out to the orthopedist who asked for an MRI of the right thigh before we saw him at 1 PM that Tuesday. 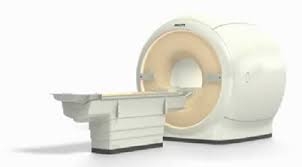 By “odd” I actually mean really painful.  Pretty much all the time.  Painful enough that walking long distances or kicking swim practice got hard to maintain.  But there is so much that hurts it’s hard to sort out where something stops and other things start.  The hip had been “out” more than in, and even the chiropractor could not sort out why.  The knee pain was persistent enough to leave her wondering if something was wrong again.  The shooting pain, tingling and occasional numbness left her wondering if a nerve was somehow damaged.

Turns out, in typical form, she was right pretty much all around.  This kid has an uncanny awareness of her body.

The doctor’s student came in first not far past 1PM.  The MRI results were up, and he mentioned the AVM.  We said, “In her knee?”  When he said no, and mentioned one higher up in her leg, I pulled the plug on his practicing and sent for her actual doctor.  Turns out the thigh MRI showed a vascular malformation in the back of her right thigh.  It was somewhere in between the muscle and the bone, and adjacent to the sciatic nerve. When the images changed you could actually see the proximity to the nerve.

So he asked for an MRI with contrast of the pelvis.  “Sooner rather than later.”

But then he had to address the issue that had been of greatest concern walking in the door.

The right shoulder had been presenting an escalating problem all during the fall swim season.  She is a powerhouse my kid.  She pushes through because she knows nothing else. The awareness that the Hypermobile Ehlers Danlos diagnosis added on in July could at least explain the frequent partial dislocations was little comfort to the body that was living with them.  A thorough examination of a shoulder with extremely limited range of motion left us with orders for an MRI arthogram of the right shoulder.  It was time to rule out a rotator cuff tear.  We left with both MRI orders, and scripts for muscle relaxant and pain meds.  We were told to try to get it done by Thursday.  Yep 48 hours. 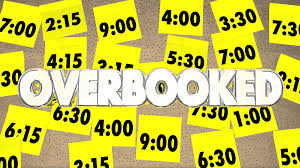 Thankfully Meghan’s insurance, which is the same as my husbands, (insurance coverage and coordination of benefits could take another post, so just trust me) does not require prior authorization for MRI testing.

So I got on the phone with scheduling and secured an appointment at the same facility we had been at at 11 AM for 3:30 PM.  That ended up being the pelvic MRI with contrast, something we avoid until we are confident something is there.  IV in place, back in the tube for another 45 minutes.

We were able to schedule the arthogram for 8AM the next morning in Brooklyn. But, not before learning that an arthogram was a pretty awful test.  As I had tried to barter for a time that would not take her out of school three days in a row, I was told that the doctor had to be on site.  I was asking for a quick schedule and I had to take what was available.  I was wondering why a doctor had to be on site, but my girl found the answers first.

And as we contemplated the test we sat in two hours of traffic to make the 32 mile trip home.

The next morning we were met by a well meaning tech in a Brooklyn office who thought my girl was going to have the catheter placed without me. You can say all the rational things you want about her being almost an adult. But PTSD is very real.  No matter how smart and articulate she is.  It is flat out real.  And that was about as huge a trigger as there is.  So I got a vest, signed consent for whatever I was about to be exposed to and held her hand while she screamed in pain.  The catheter was placed.  The contrast was injected, and we were back to another 45 minuted in the tube.

The appointment at 1 the next day was overwhelming to say the least.  The pain, the anxiety and the exhaustion were palpable.  The news that there was no rotator cuff tear was met with simultaneous relief and exasperation.  And if you don’t quite understand that it is probably because you have not lived with daily pain so intense you would give just about anything to hear that it was fixable.

Our orthopedist is nothing short of amazing, and he was able to explain to her that it was likely that repetitive partial subluxations caused muscle spasms that left the shoulder sitting just out of place enough that it was incredibly painful.  And because the muscles were in almost a constant spasm she couldn’t get it back “in.”  He explained the strength of her back and how some muscles are overpowering others.  He broke down the directions for PT.  He pulled her from the water for 7 days.  He started a muscle relaxant 3 times a day.

Then, he had to explain to her that we should head back to Lennox Hill Hospital to see the interventional radiologist who dealt with her prior AVM.  It had been three years since we had seen him, in hopes we were done for good.  The placement of this “small” AVM (and think relative here, does a splinter hurt?  Yep.  So a grape hanging out somewhere in between the bone, muscle and nerve probably would too.) was difficult from an ortho standpoint.  He felt that embolization, closing off the blood supply to the malformation, would give a quicker recovery than trying to dig it out.

We had an appointment on December 2nd at Lennox Hill.  Just enough time to let the muscle relaxants start to kick in, PT to begin, and the shoulder to start moving slowly and painfully.

The doctor looked at the scans, did his own ultrasound and told us to schedule the procedure.  We left with a date of Tuesday, December 17th for an outpatient procedure.

The date was carefully chosen by my girl.  The 17th meant she’d miss only 4 days of school, and for a junior with a rigorous schedule and a 4.0 that mattered.

Also, the 17th meant she could go to Lancaster, PA the weekend prior to compete in a qualifying swim meet she had worked for years to make.  She had been looking at this meet since she began swimming years prior.  When she made her first, second, and third cuts over the months leading up to it, she was ecstatic.  Now, she was facing this meet with a different set of eyes.  The training interruptions caused by her shoulder meant she was unlikely to attain any best times.  However her gentle giant of a coach reassured her she should go for the experience.

And it certainly was an experience!   We left for home Sunday the 15th with the coach’s approval of three good swims.  She knew it was the last time she’d be in the water for a bit.

We left home Tuesday the 17th for at 8 for a 10 AM arrival.  This was surgery 19.  We knew the routine.  She had had nothing to eat or drink since 9 the night before.  The wait was long.  It was after 2 when we were waiting to leave her in the OR.  And as we were leaving the team made a last minute change that they would do the procedure on her stomach.  That meant a more aggressive anesthesia and an overnight stay which we were not prepared for.

We were placed in luxury accommodations, better than most hotels I’ve stayed in, because pediatrics was overbooked.  We ended up in the executive suite.  With nothing we needed.  Felix headed home on the bus to gather supplies.  He then drove back to the city and met me at the door to the hospital before heading home for the night. 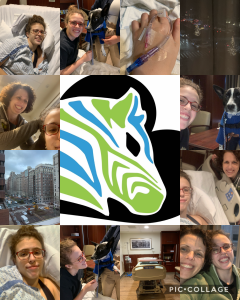 I was glad we stayed.  The pain needed hospital level management.  The pain medication allowed for some brief silly time.  She was discharged around noon the next day.

As I went to gather the car from the lot I was prepared for the hefty overnight fee, but not for the giant scrapes along my right rear panel. Clearly my car had been hit, hard.  The bumper clip was broken.  I had just enough time to file a claim with the garage before she let me know the transporter had her in the main lobby.

I settled her into the car in terror because she could not get a seatbelt on.  I prayed so hard during that white knuckle drive down the FDR and through the tunnel.  We arrived safely home 45 minutes later where a neighbor saw us struggling and helped her up the stairs into the house.

As I write, it is the afternoon of 12/22.  If you’ve read this far you know it’s been a long month.  But the longest days came after we arrived home.

My girl is used to being just on the outside in most social situations.   I do not know why.  I can theorize for days, but it doesn’t matter really.  It just is.  So when you are on the edge, you get your interactions with people when you are there. When you are not there you get the often difficult to process feeling that you are not missed or your absence isn’t noteworthy.

There were some cards, and some well intentioned messages from well meaning family and friends.  They lit up her whole being.

If I’ve learned anything from watching her recover and rehab time and time again, it’s this.  When you’re not sure what to do, show up.

I don’t mean in person necessarily.  Although those visits can bring brief humor and relaxation.  The irony of this technologically connected world is that we are more distant than ever, when it is so easy to show up.

When in doubt, send a text.  There is no need for gifts or grand gestures.  Offer a face time call.  Let someone know you care, especially in the first 4 days when then pain is often the worst.  It’s ok to reach out because these phones are all on mute.  And you won’t bother someone sleeping, you will only make them smile when they wake.

Whether it’s one surgery or 31, the chronically ill patient appreciates it.

There are so many super-convenient ways to show up.

So many that we are practicing showing up more for others.  Because the world is round.  And you may not ever repay the kindness sent to you, but showing up for someone else can change everything.