We don’t watch many sports in my house.

Meghan’s sport of choice is swimming.

So it came as a little surprise when she was asked by the Borough President if she’d like to throw out the first pitch at a Staten Island Yankee Game to help draw attention to her platform and continue to raise awareness of Cowden’s Syndrome.

She didn’t hesitate with the “yes,” although she admitted not being too sure of what she had gotten herself into.

Thankfully my very good friend has 4 boys.  And among them they were able to locate some gloves and some baseballs for a few impromptu pitching lessons.  And I have to say they did a good job.

Leaving for the game she had quite a nervous stomach.  Once we arrived she was focused on a “practice pitch.”  Once that was accomplished we had a few moments to take in the magic around us.

60 of our friends and family had taken time out of their lives on a busy Wednesday night to support Meghan, and our need to raise awareness of Rare Diseases.  In addition, it was team night for Meghan’s Swim Team, so there were many of them cheering as well.

When we had first set the date, I wasn’t sure how public to make the event.  I didn’t want to put people out.  So I posted it on my Facebook wall a few times.  I was floored.  And intrigued.  My cousin Kim asked me to order 23 tickets for her.  I didn’t ask too many questions.  My family is big enough that cousins have to trust each other.

We were greeted by Kim, and there were T- Shirts.  It took me a second or two to process.  Then I read it.  Looked around.  Choked back a tear and threw it over my head.

The pitch went off without a hitch, and the announcer crammed so much information into a minute it was amazing.  It’s hard to hear, but trust me!

The night was just fun.  Exactly how summer nights should be.  The weather was perfect.  The company was outstanding.

And, even as the crowd began to dwindle, we sat to watch the game, with the Yankees down 4-1.

And in the bottom of the 8th as it neared 10 PM, Felix and Meghan made a deal.  If the Yankees scored in this half, we could stay till the end.

Four runs later, they pulled off a beautiful “come from behind” win.

And as we walked to the car we stopped at the “Postcards 9/11 Memorial” and we remembered how very lucky we are, even in the midst of chaos.

That first pitch, symbolic of overcoming challenges.  Of conquering fears, and of new beginnings.

That win the Yankees had just pulled seemingly out of thin air, was the result of a refusal to quit.

They worked like a team.  They made it happen together.

A perfect ending to a perfect night.

Here are pictures of SOME of our team.  There are just so many more that support us each and every day.

We LOVE you all.  Thank you for helping us tell the world.  We are … 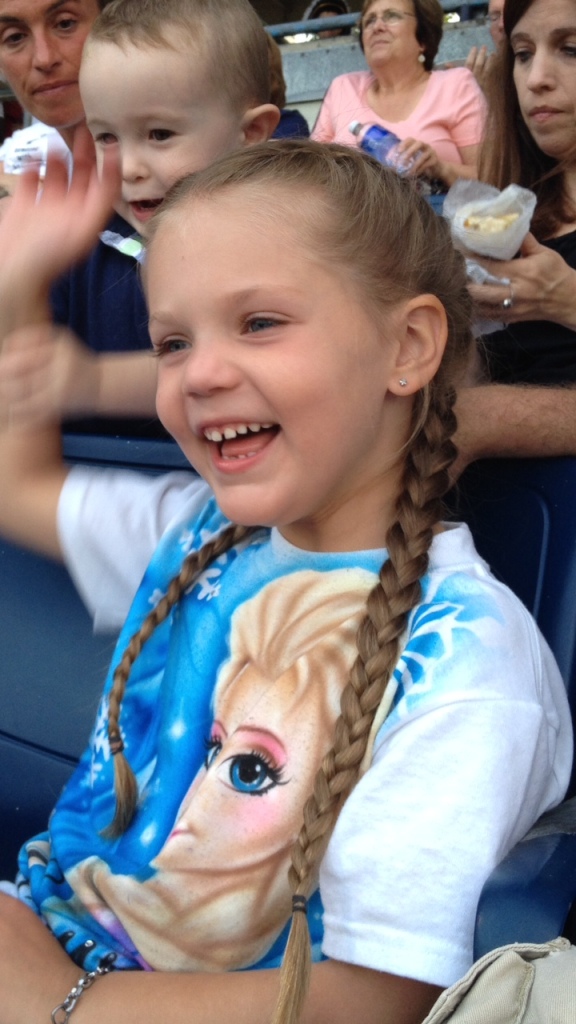 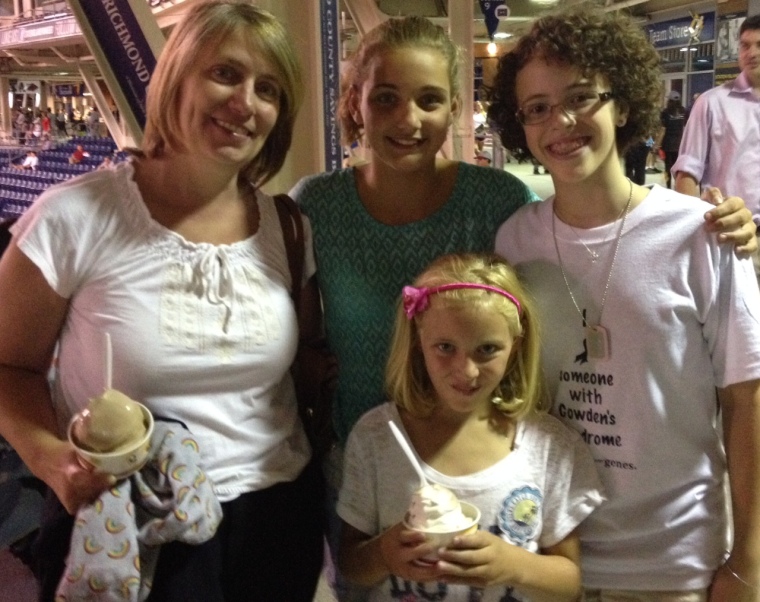 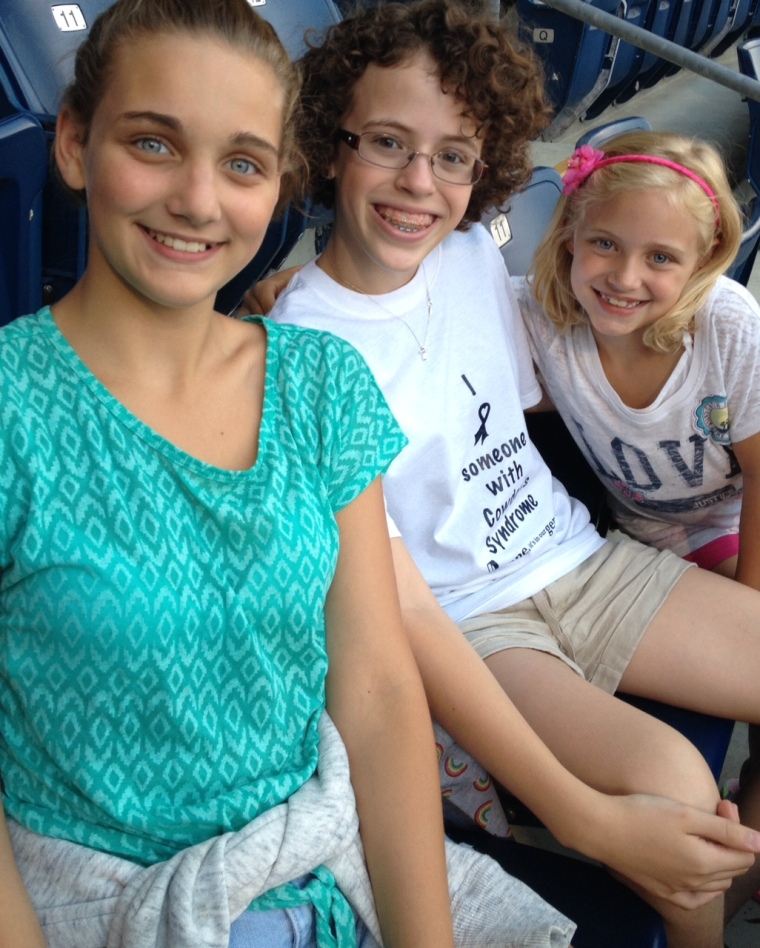 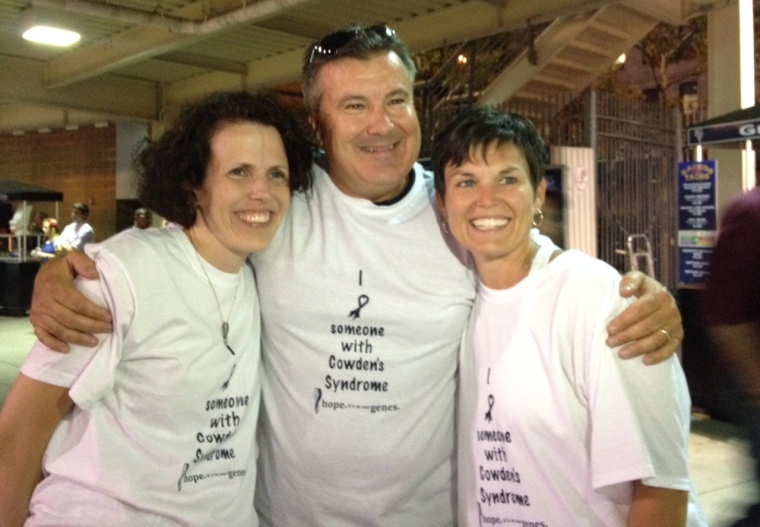 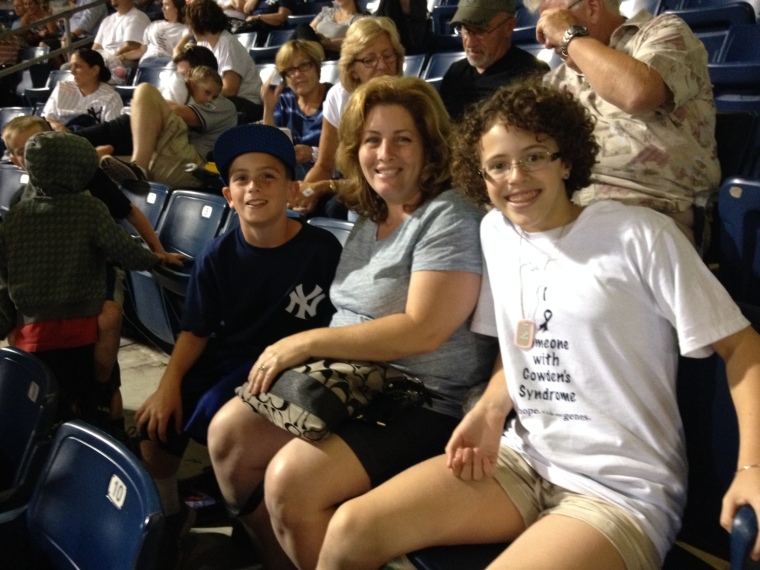 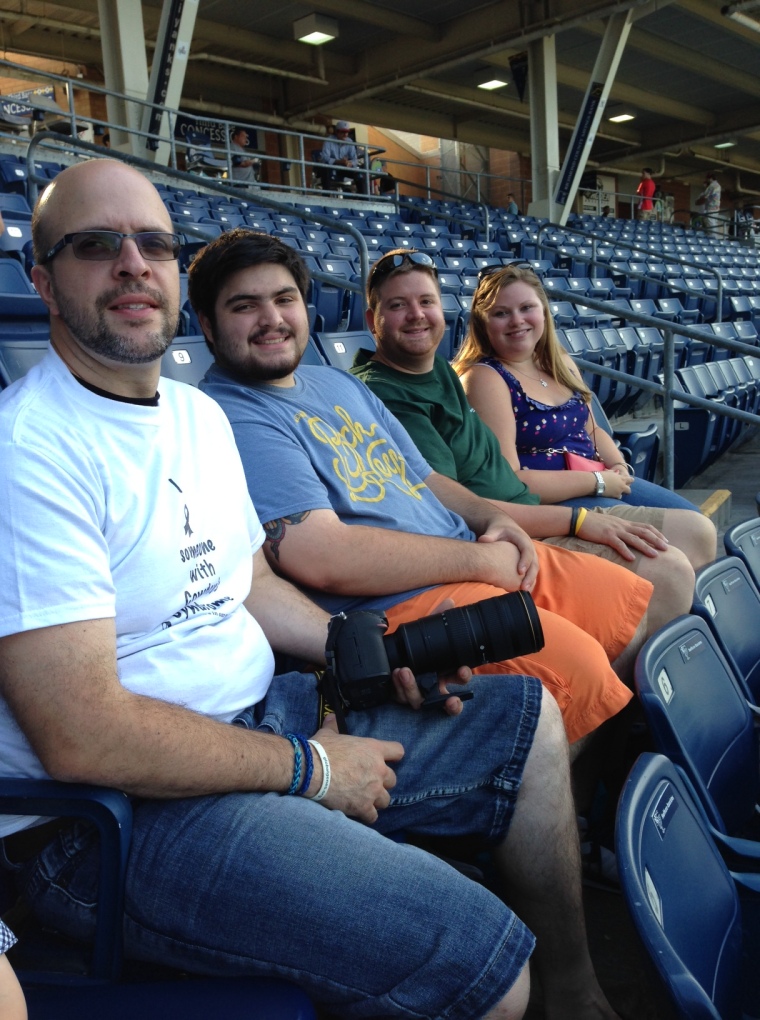 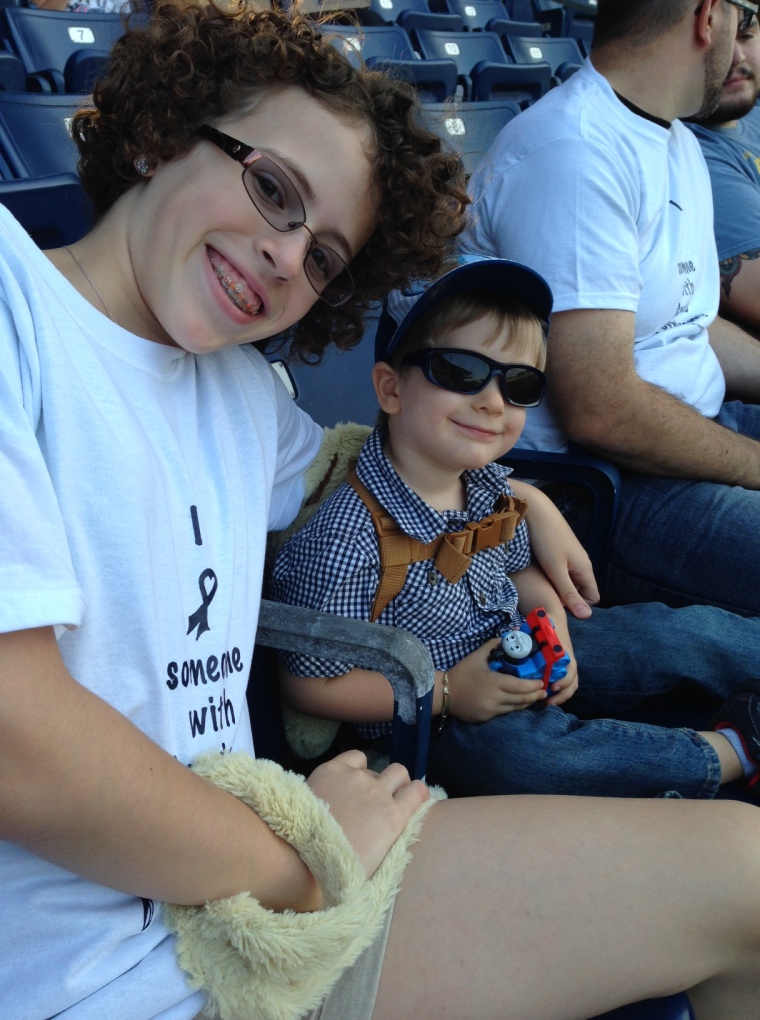 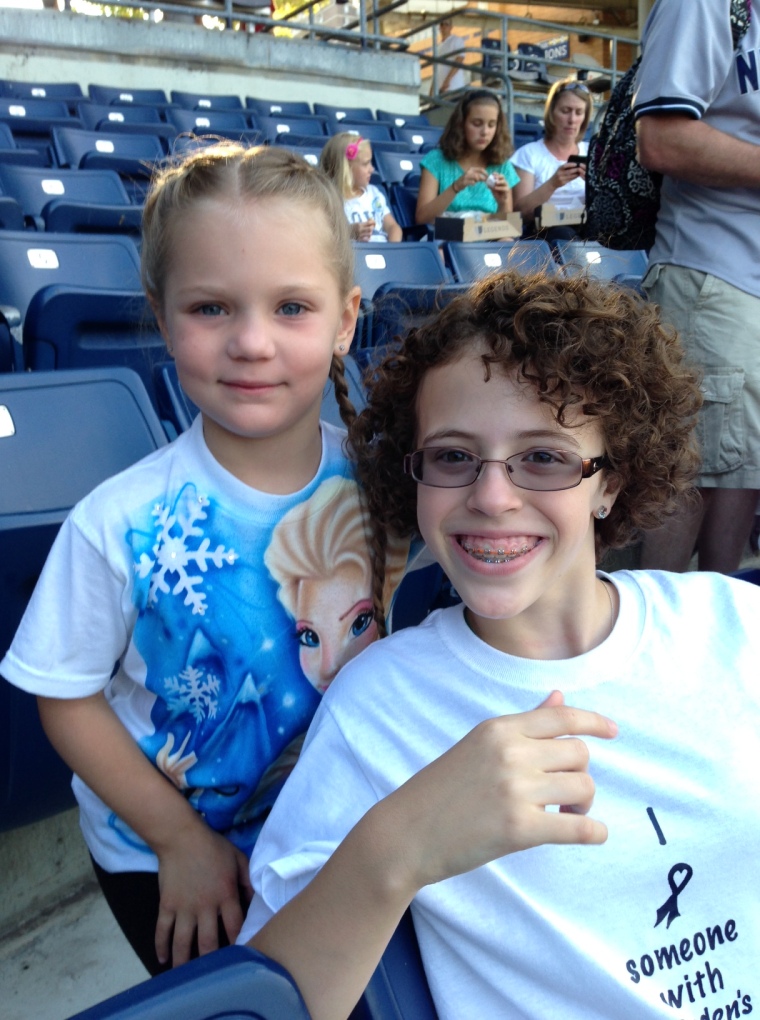 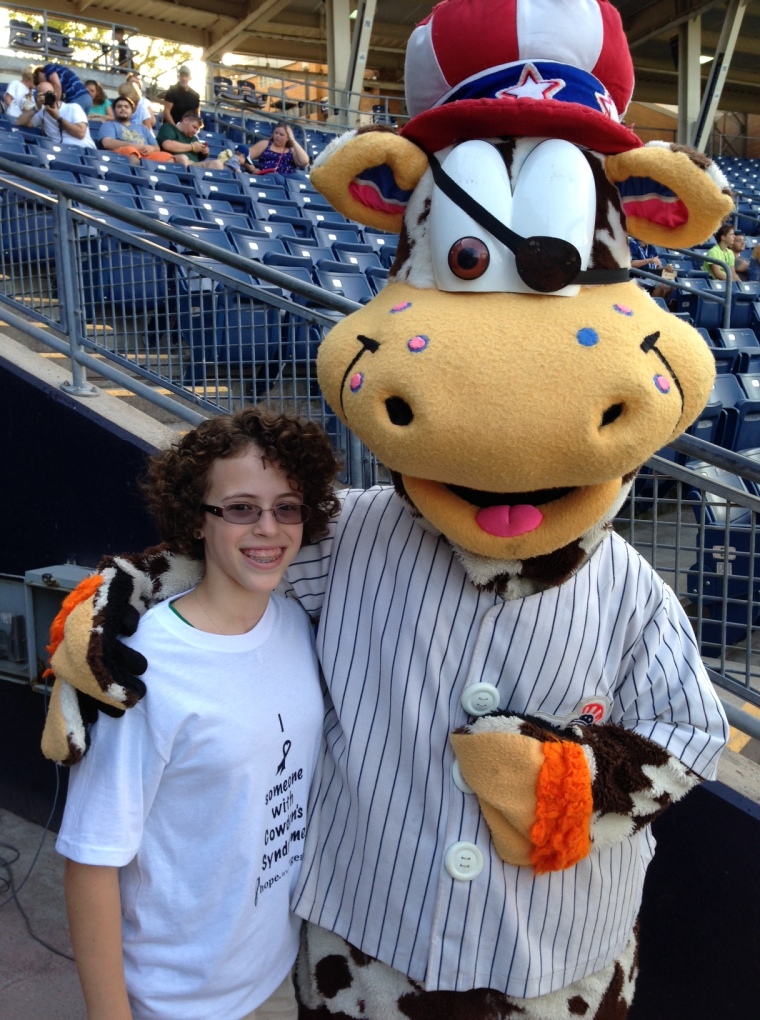 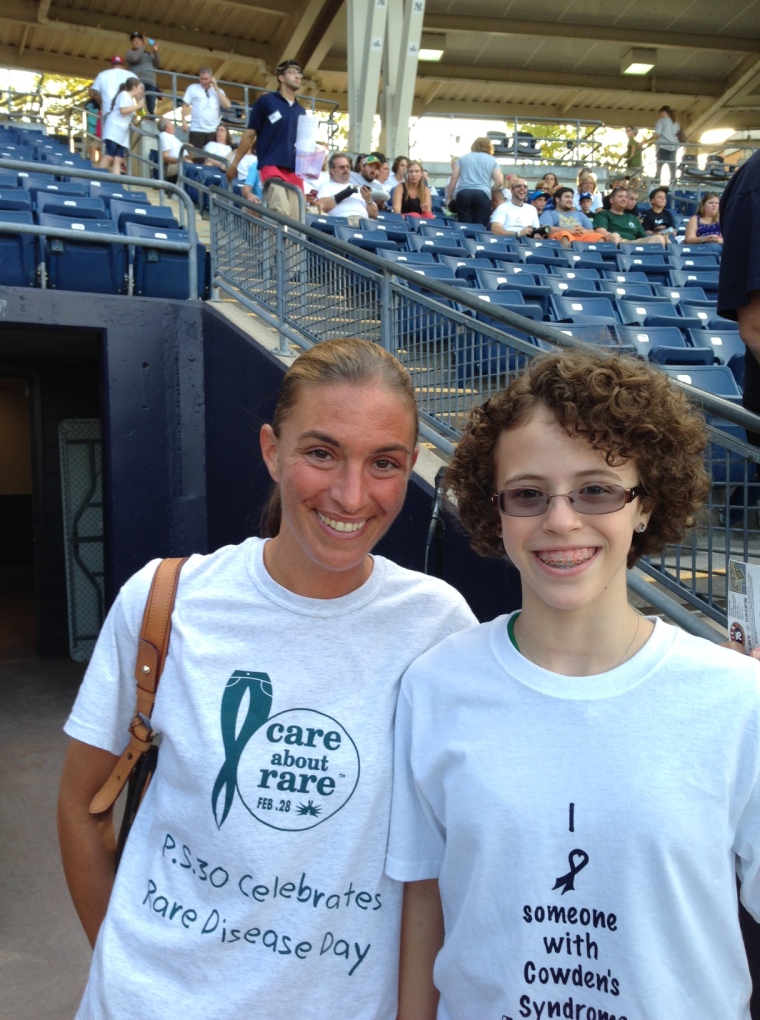 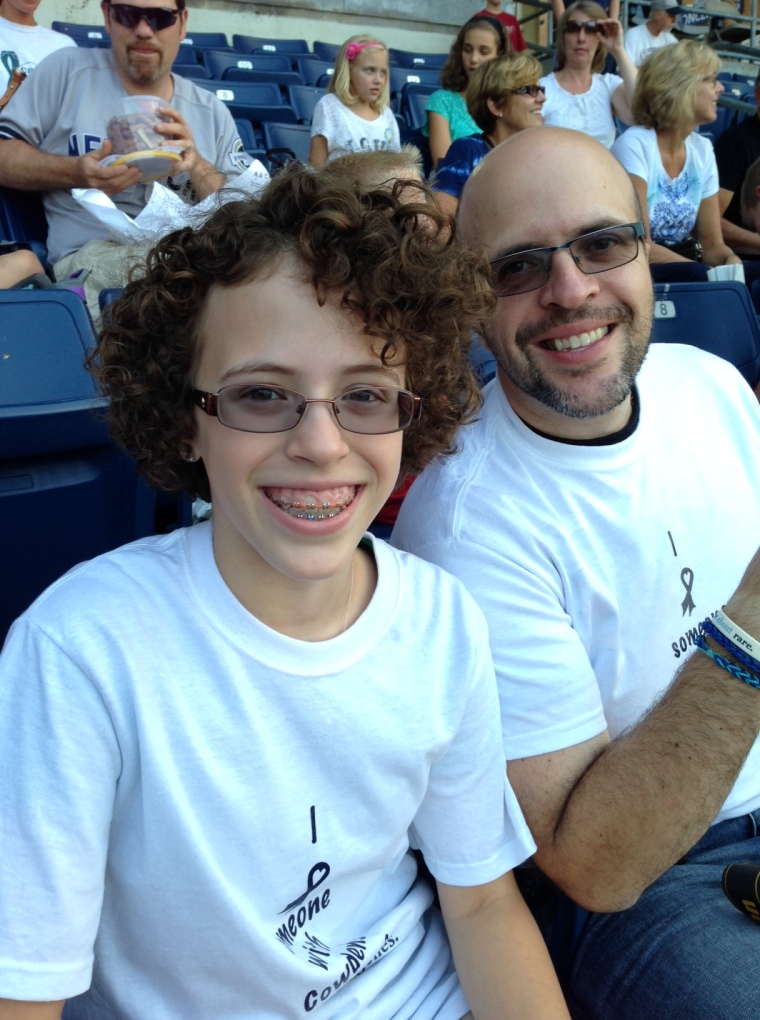 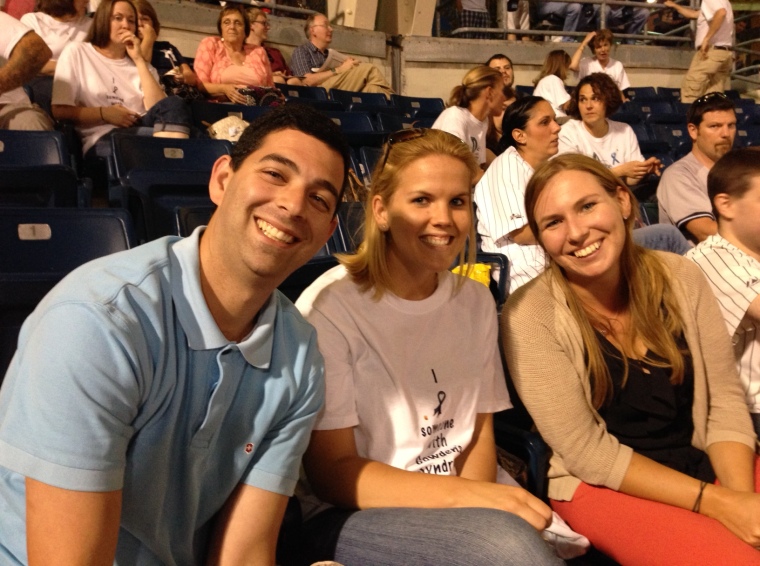 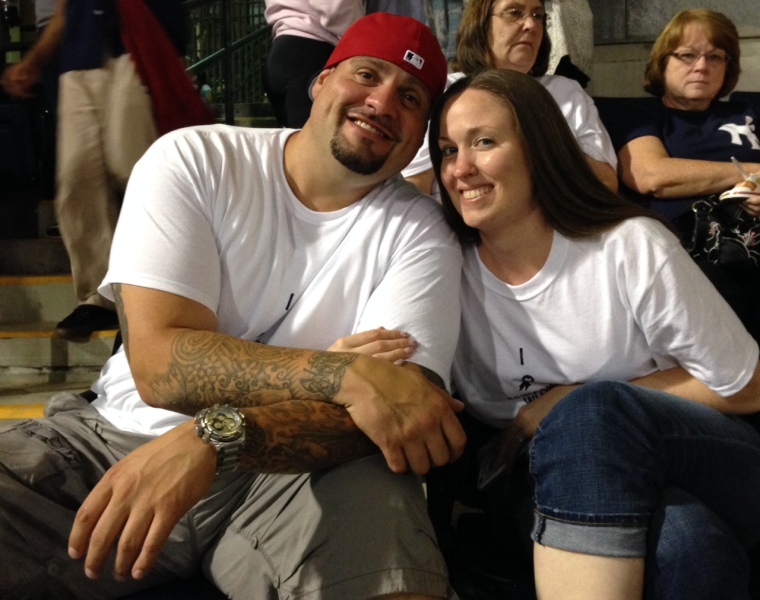 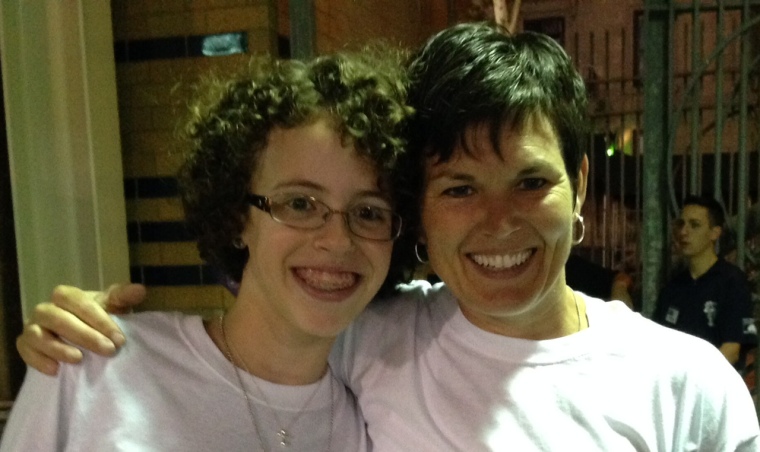 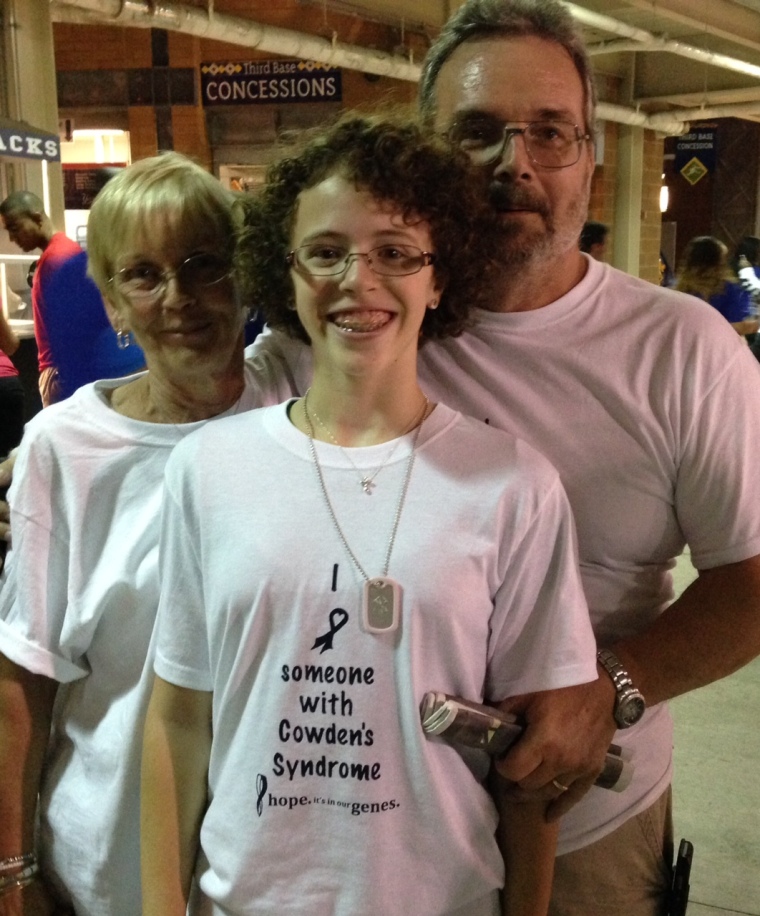 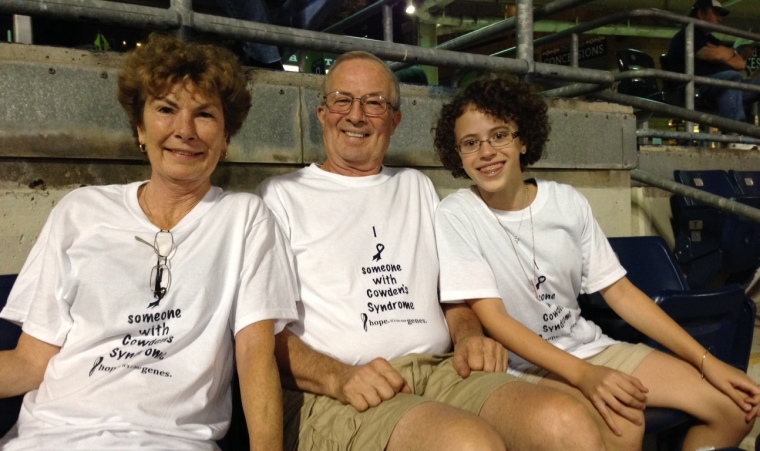 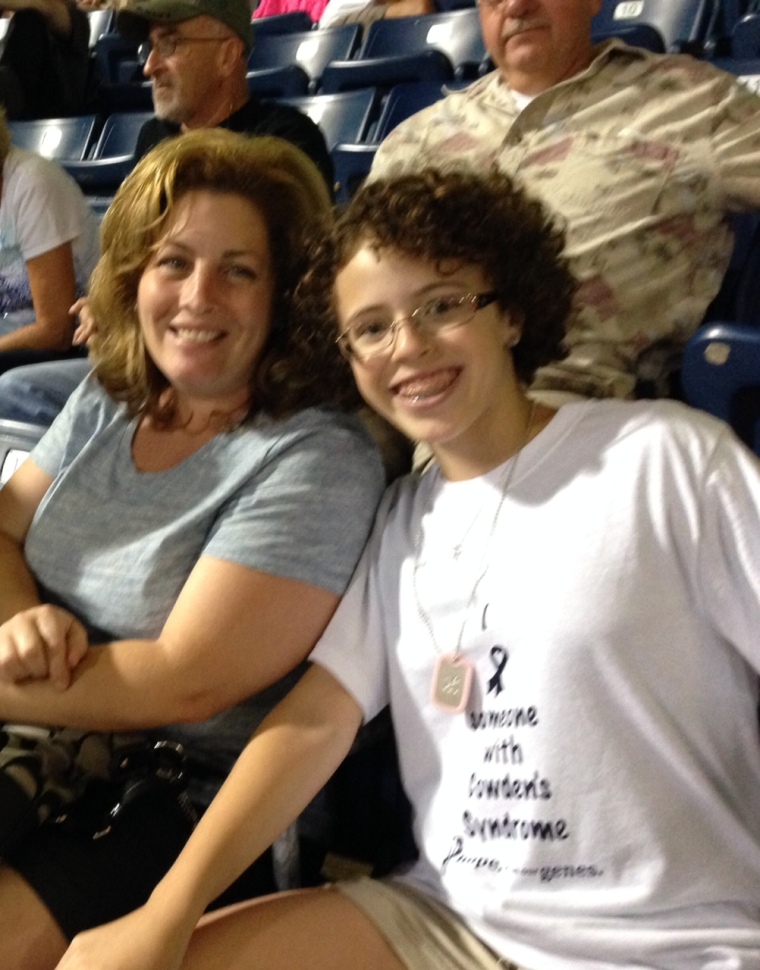 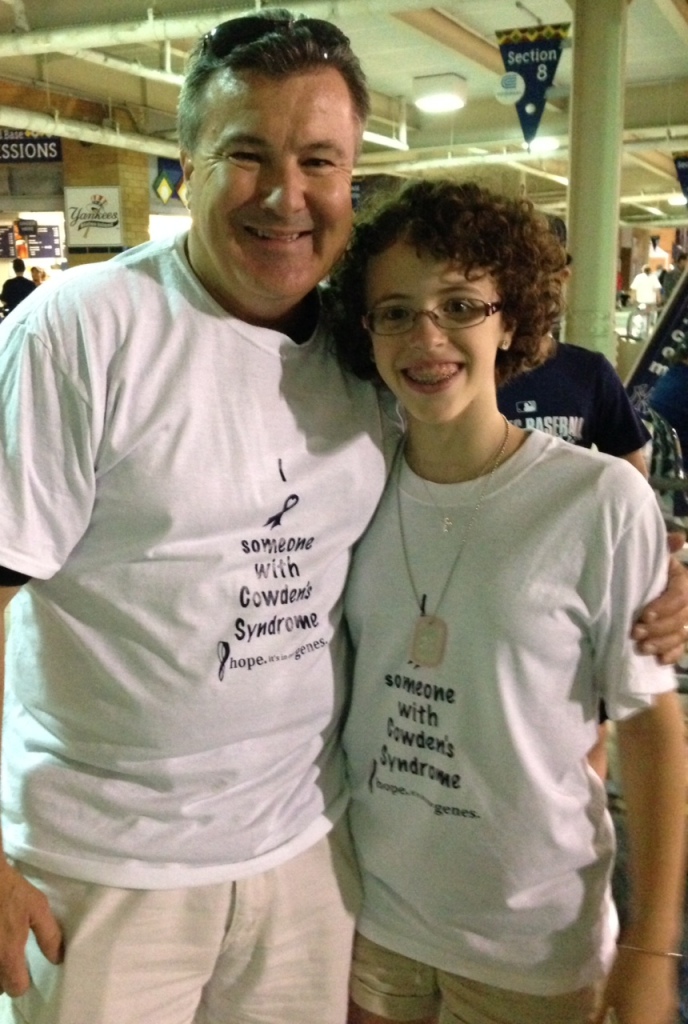 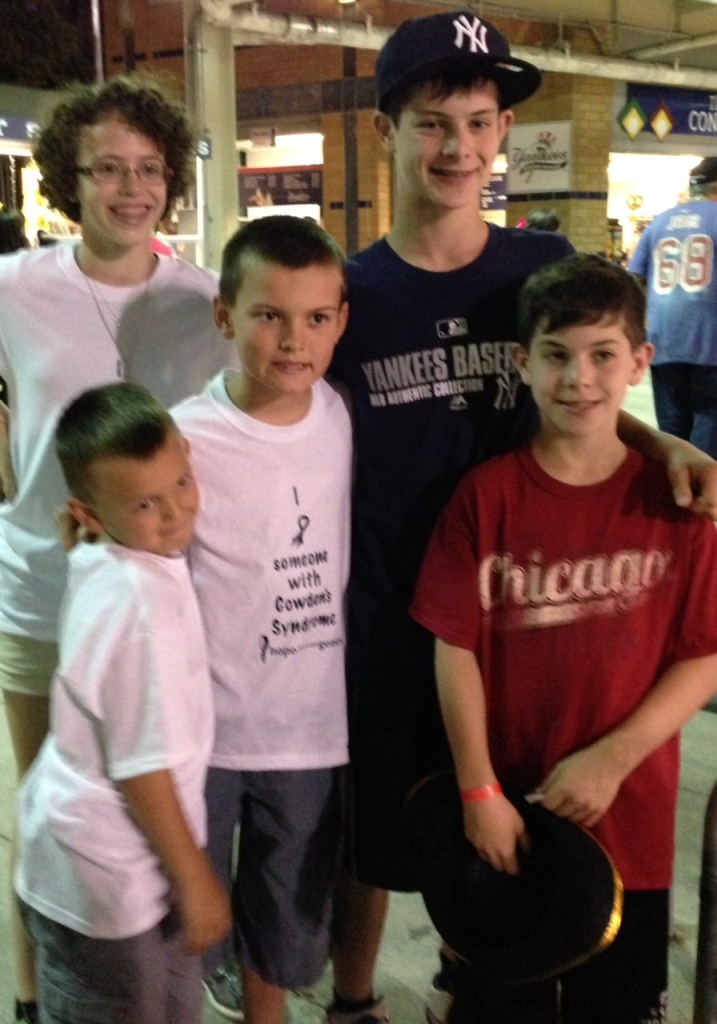 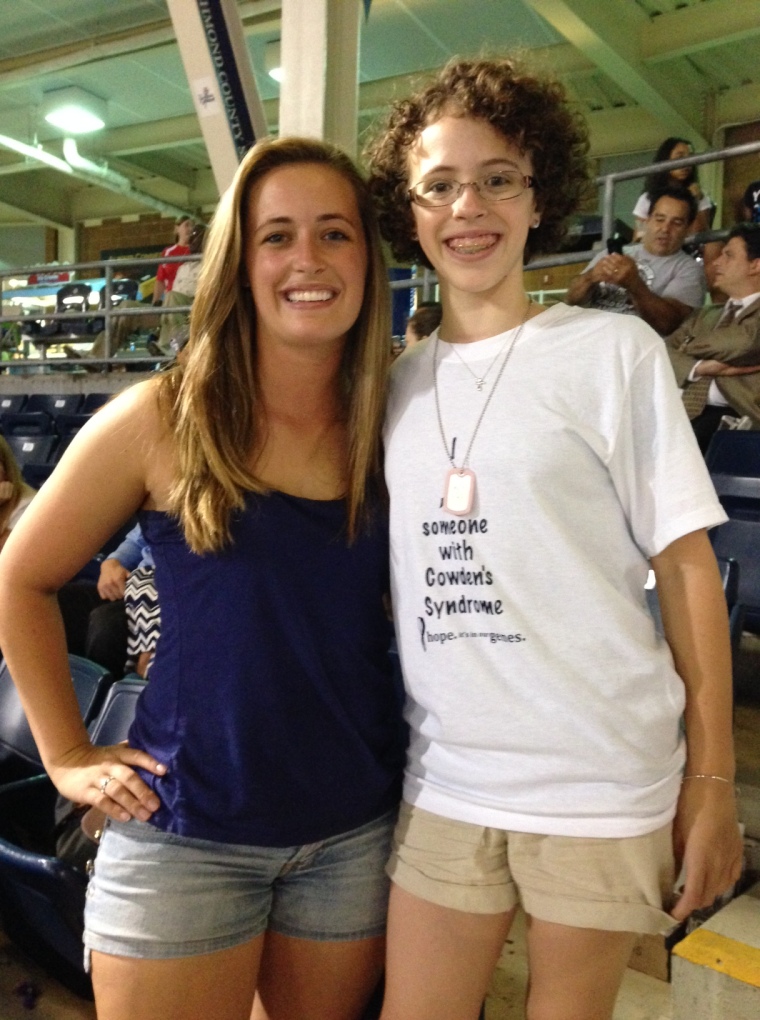 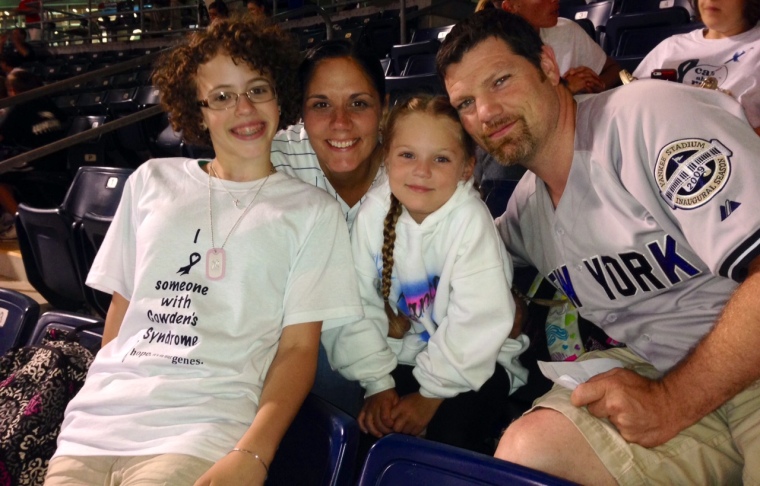 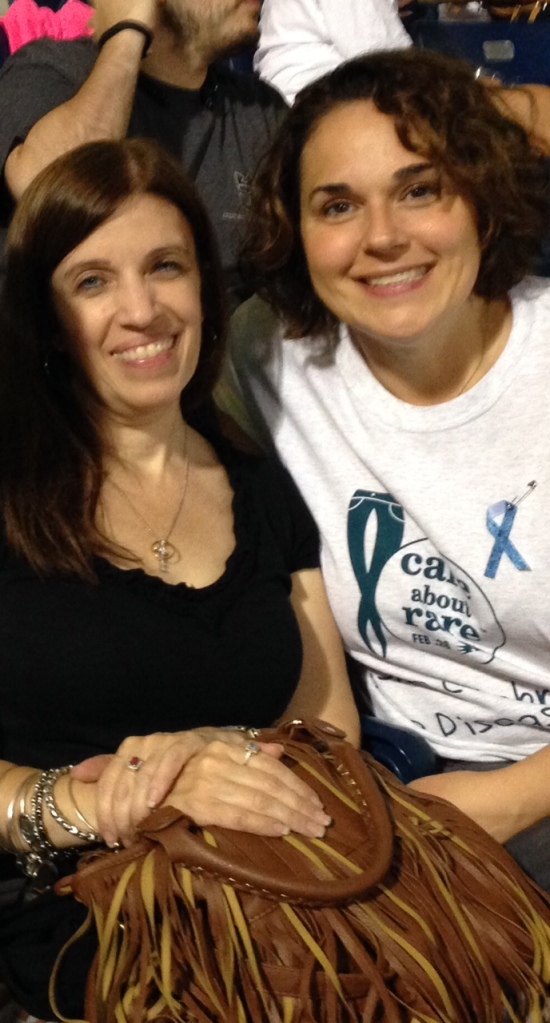 It is only with your support that we continue to push on. 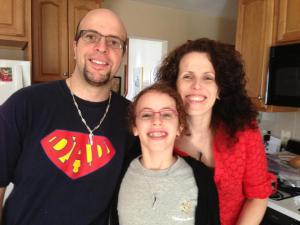 My heart and soul.  My circle of strength.

A few weeks ago Felix mentioned he might like to have a denim ribbon pendant to wear.

They are modeled off the Global Genes Project logo, “Hope it’s in our genes!”

He wanted to be able to show his support for Meghan and I all the time.

So, we had another one made and I gave it to him for our anniversary.

I didn’t imagine the effect it would have on me.

What a magical thing to see the ones you love most joined with a symbol of support.

Symbols are just symbols I know – but what they symbolize can still be powerful. 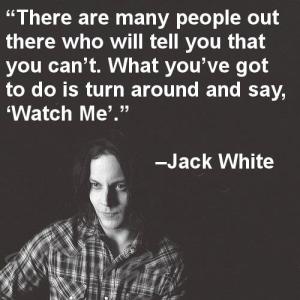 Felix gives us the motivation, the strength, and the courage to say “I can.”

He makes us laugh.  He holds our hands.

He is as much a part of this Cowden’s Syndrome journey as we are.

We are three but we are one.

Now, near or far we remain connected.

There are no “superpowers” in these denim ribbons…

Well, unless you count LOVE, GRATITUDE, COURAGE, STRENGTH, and HOPE!

… but no one else seems to want to listen.

I am tired.  Not just the physical tired, but the mental and emotional tired too.

My body is exhausted.  Tomorrow I head back to work.  Two major surgeries in 3 months.  I think my incisions might be healed, but I am just so wiped out.

This recovery from my hysterectomy has been nothing short of obnoxious.  The bleeding seems to have subsided, and the pain is gone.  The restrictions are still in place, but the hardest part has been feeling so damn alone.

Days go by, the phone doesn’t ring.  Not a text message to check in.  Not expecting fanfare here, but a little love from my friends and family would be nice.  Now there are a few.  There are always a few… but even with them, I am lonely.

That loneliness hasn’t helped me feel better.  No.  Not one bit.  Combine that with the fact that my dear husband, who truly tries his best, is in school 2 nights a week, and has worked more overtime in the last 2 weeks than he has since December.  He can’t say no.  Not in this economy.  And he so rarely gets called.  Timing sucks.

So it has been me, and my girl.  She is awesome.  Yesterday when we realized Daddy definitely wouldn’t be home, and we were dangerously low on food, she came to the grocery store with me.  She didn’t let me lift a thing.  She packed the cart, packed the bags, and carried them right into the house.  She is awesome.  But, she is tired too.  She is always willing to take care of me.  But she is 8.  A friend would make for a much better weekend.

So, today I took her with me to a meeting at my church.  Remember a few weeks ago when I said, “I don’t have a problem with God…it’s His fan club…?”  Well that is getting more true by the day.  I can actually say I was disgusted by my minister, and a large portion of my church.  The church where I have grown up for the last 38 years.  Things are tenuous between the pastor and myself, I would say largely due to his LACK of support, but he did not even greet my daughter or myself at the meeting.  She is so astute.  I am trying to channel her energy away from anger, but she feels the hurt in me.

I know there is a plan here.  One larger than me, larger than any of us.  I do believe strongly in God and His guiding hand.  I have been blessed with several miracles, and witnessed others.  I know He is here, but I do not often understand His  plan.

So, in the midst of all the chaos, the drama, and the confusion, I seek solace in music.  I remind myself that these people who are so painfully absent – don’t mean to be hurtful.  Those full of drama are lacking the bigger picture.  I never lose touch with the reality that I am not the only life struggling.  There are so many others, so much worse off.  But for now, for right this minute, it doesn’t change the fact that I am sad, scared, and lonely.  No one really wants to hear it, because they can’t fix it.  But its true.

I have always believed everyone does the best they can with what they have where they are.  So, even amidst my sadness, I do not have anger.  People have their reasons.

Tomorrow I will go back to work.  I will smile brightly as if I was without a care in the world.  Even if my bones ache from exhaustion, and my heart aches to share this pain with those I love, I will smile.  I will get through the days, one at a time.  And I will always have a song in my heart to help me.

So your life feels like it don’t make sense
And you think to yourself, ‘I’m a good person’
So why do these things keep happening?
Why you gotta deal with them?You may be knocked down now
but don’t forget what He said, He saidI won’t give you more, more then you can take
and I might let you bend, but I won’t let you break
and No-o-o-o-o, I’ll never ever let you go-o-o-o-o
Don’t you forget what He saidWho you are ain’t what your going through
So don’t let it get the best of you
Cause God knows everything you need,
so you ain’t gotta worryYou may be knocked down now
but just believe what He said, He said

I won’t give you more, more then you can take
and I might let you bend, but I won’t let you break
and No-o-o-o-o, I’ll never ever let you go-o-o-o-o
Don’t you forget what He said

I won’t give you more, more then you can take
and I might let you bend, but I won’t let you break…

I won’t give you more, more then you can take
and I might let you bend, but I won’t let you break
and No-o-o-o-o, I’ll never ever let you go-o-o-o-o
Don’t you forget what He said

After she stopped laughing at my Tshirt,

“No, they’re not real (the real ones tried to kill me)”

the surgeon who two weeks ago did my hysterectomy did a wildly uncomfortable internal that brought back memories of the one when I was 41 weeks pregnant.

She then declared that I was, “healing well.”

I laughed and reminded her I am a “professional at recovering.”  At least she has a sense of humor.

That is what we Cowden’s patients do, isn’t it?  Surgery to surgery, procedure to procedure, happily enjoying the time in between.  Knowing it will end.  We recover.  And we darn well better recover stronger and wiser and with our humor in tact – the alternatives are frightening.

She did tell me, because nothing should ever be quite “normal,” that she has never actually seen internal stitches come out so fast, and in pieces so large.

I told her in the hospital my body didn’t care for dissolvable stitches.  She laughed at me then too.  Come on, almost 20 surgeries later – I know my body.

So, it’s essential that I don’t lift anything over 10 pounds for at least another 3 weeks.  I need to avoid bending any more than necessary.  No swimming. No pushing.  No pulling.

When I left the hospital they told me I could drive in 2 weeks.  I lasted 6 days.  I am an overachiever.  I also asked them when the chauffeur was coming to drop off, pick up, and all that other stuff.

Now, since I know the stitches are loose too early I will try to be good.  But really, when are they sending the housekeeper, preferably one who cooks allergy safe meals?  My husband is working all day Saturday and Sunday.  There is a bit of an echo, or occasionally an attitude when I ask for help.

So, my girl and I will make it through.  Ticking the time away until her appointment June 14th. This time its my turn and she is awesome.  Next time it will be her turn to be “healing well.”

Dear God, please remind me to ALWAYS be there for her, and support her, her whole life, no matter how tired or busy I may be.  AMEN